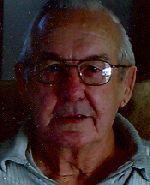 He was born on March 6, 1929 in Washington Lake Township, Sibley County the son of Albert & Gertrude Heckmann Lenzen Sr.

Albert was baptized on April 14, 1929 at his parents’ residence by Reverend J. Berkenkamp. He was confirmed in the Christian faith on March 29, 1942 at St. Paul’s Evangelical & Reformed Church in Hamburg, Minnesota.

He graduated from Central High School in 1948.
He honorably served his Country in The United States Army during the Korean War.

On April 6, 1951, Albert W. Lenzen and Myra B. Schumann were joined in holy marriage at Zion Lutheran Church in Mayer. God blessed their marriage with four children.

Al was employed for thirty plus years as a Lineman/Trouble Shooter for NSP and retired at age 60.

Albert was a faithful member of St. John’s Evangelical Lutheran Church in Winsted. He also was a former longtime volunteer fireman on The Norwood Fire Department and belonged to The American Legion and V.F.W.

Preceded in death by his wife of fifty seven years: Myra B. Lenzen on January 10, 2009 and by his parents: Albert & Gertrude Lenzen Sr.

Funeral services for Albert Lenzen will be held on Friday, October 30th at 11:00 A.M. at St. John’s Evangelical Lutheran Church in Winsted. Pastor Mark Loder will officiate and interment will follow at The Winsted Public Cemetery with military honors. Special music provided by Bruce Gatz and he will sing “Lord’s Prayer”. Congregational hymns will be “On Eagles’ Wings”, “In the Garden” and “Amazing Grace”.

A visitation will be held on Thursday, October 29th from 4-8 P.M. at The Chilson Funeral Home in Winsted. The Norwood/Young America Fire Department will come as a group at 7:00 P.M. and an American Legion Ritual will be beld at 7:30 P.M. Thursday evening.