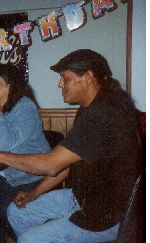 All night wakes will be held on Saturday, December 11th and Sunday, December 12th beginning at 4:00 P.M. at The Bishop Whipple Mission in The Lower Sioux Community.