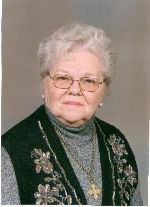 Visitation Information
AT THE CHURCH
Saturday, January 30th, 2016
10:00 to time of service

Airi Aliisa Davidson age 85 of Winsted passed away Friday, January 22nd at St. Mary’s Care Center in Winsted MN.
Airi, the little lady with the Finnish accent, was born to Yrjo and Aino Makinen in Mikkeli Finland on June 19, 1930. Airi lost her father at an early age and only 2 of 6 siblings survived to adulthood, Airi and her sister Assi.
Airi’s childhood was during the Russian-Finnish war. Running to bomb shelters during Russian bombings was a common childhood occurrence. Going to theaters to watch American movies was a way to escape war, and to forget how hungry they were. As young girls Airi and her sister were separated from their family when their city was evacuated as Russian troops advanced. The train carrying the refugees was even strafed by Russian fighters.
The family lost everything in the war but Airi’s talent got her into a prestigious art school. Airi worked as a commercial artist for Paulig Coffee company in Helsinki.
Airi and her girlfriend Sanu traveled a lot as young women. One of Airi’s trips brought her to Perham Minnesota, where she met, fell in love with and married Robert Davidson on October 11th 1952. Shortly after their marriage, Immigration and Naturalization Services deported Airi. The newlyweds were separated for about a year until Airi was allowed to reenter the United States. They had one child, a son, Gregory.
There was not much work for a commercial artist in Perham so Airi began work as a nurse’s assistant at St. James Hospital in Perham. Airi continued working as a NA at St. Mary’s Hospital and Home when the family moved to Winsted Minnesota in 1963. In 1981 injuries from a tragic auto accident prevented her from returning to work.
Airi became a naturalized American citizen in July of 1959. She did it because she wanted her son to have an American mother.
Airi loved flowers and gardening and had a green thumb. Hobbies included painting, sketching, quilting, and knitting afghans. She was an avid science fiction fan and loved Star Trek. She was also superstitious not wanting to venture out on Friday the 13th. She told fortunes with a deck of playing cards, something her grandmother had taught her how to do.
Although she had severe arthritis and numerous other health problems she maintained a positive attitude, considering herself blessed to have enough to eat and a home, things many of us take for granted. She loved and spoiled her grandchildren. She loved Christmas and the tree always had to reach the ceiling.
Airi was a faithful member of St. John’s Lutheran Church in Winsted.
Airi was preceded in death by her parents, 5 siblings, and husband Robert.
Survived by her only child, a son Gregory (Donna) of Winsted, Grandchildren Robert (Stephanie) of Alexandria, Jonathan (Cory) Lester Prairie, Jennifer (Rick) Stenberg of Joliet Ill, Great grandchildren Owen, Matthew, Victoria, and Gregory; sister-in-law: Beatrice (Cliff) Bigley of Mesa, Arizona, brother-in-law: Kenny Davidson and sister-in-law: Marion Davidson of Grand Forks, North Dakota; and lifelong friend Sanu (Bill) Bauck of Perham.
Funeral services for Airi Davidson will be held at St. John’s Evangelical Lutheran Church in Winsted on Saturday January 30th, 2016. Pastor William Keller will officiate. Sheryl Menden will be the organist and Bruce Gatz will be the soloist for the funeral service. A visitation will be held at the church from 10:00 a.m. till time of services at 12:00 P.M. with lunch to follow.
Interment will be Sunday January 31st at St. Paul’s Lutheran Cemetery in Perham Minnesota.