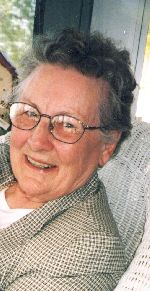 Memorial Service will be held on Saturday, July 20, 2013 at 11:00 AM at Chilson Funeral Home. A visitation will be held at the funeral home from 9 AM until the time of services.

She was born on August 7, 1918 in Winsted, the daughter of John & Sophie Guennigsman Schlagel. Her parents operated the family farm northwest of Winsted. Agnes had many fond memories of growing up on the farm.

On her 22nd birthday, Agnes married Leonard Saari. They made their home in Cokato and were blessed with two daughters, Norma and Renee’. For nearly four decades, Aggie worked at Peterson Pharmacy including the transition into Keaveny Pharmacy. Agnes and Leonard enjoyed many activities together, including fishing, gardening, card parties, dancing, and time spent traveling to Wisconsin and Northern Minnesota to visit family and friends. Being of German descent but married to a Finn, she grew to love Saturday night saunas.

Agnes was proud being the flag bearer for the Cokato Auxiliary for many years and marching in parades with the Legion. After her retirement and well into her eighties, she racked up countless miles serving as a volunteer driver for Wright County Social Services bringing people to their various appointments. She also traveled to Guatemala to visit her granddaughter’s family and spent three weeks touring Europe with her two daughters.

Agnes lived in the Cokato Charitable Trust community during her later years. She enjoyed many activities including the whist group at Edgewood Gables once a week, attending Mass, visiting with family and friends, fishing, van rides, and various outings.

Her smile and pleasant nature will be missed by all!

She is preceded in death by her parents John & Sophie Schlagel, husband Leonard, four brothers, and two sisters.

In lieu of flowers, memorials preferred. The family will be making donations in Agnes’ name to the Ridgeview Hospital Hospice and the Cokato Charitable Trust.