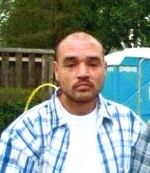 He was born on October 19, 1976 in Minneapolis, MN the son of Adrian Yellow and Candice Thompson.

Adrian enjoyed spending time with his family, being outdoors, listening to music, and watching football. He was a “joker” and was known as the family comedian. He was an affectionate person and loved his kids very much.

He is preceded in death by many relatives.

An all night wake will be held on Friday, December 27, beginning at 5:30 P.M. at the Little Earth of United Tribes in Minneapolis, MN.

Funeral Services for Adrian Thompson will be held on Saturday, December 28, at 11:00 A.M. at the Little Earth of United Tribes.