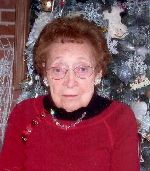 She was born on March 4, 1913 in Victoria the daughter of William & Kathryn “Kate” Hesse Specken.

On November 20, 1934, Adeline L. Specken and Herman A. Karels were joined in holy marriage at St. Bernard’s Catholic Church in Cologne. God blessed their marriage with a daughter Lorraine. Adeline & Herman engaged in dairy farming for many years.

She was a faithful member of Holy Trinity Catholic Church in Winsted and also belonged to The St. Anne’s Society.

Preceded in death by her loving husband: Herman A. Karels, loving daughter: Lorraine K. Mickolichek, a son-in-law: Tom Mickolichek, her parents and by ten siblings.

A Mass of Christian Burial for Adeline Karels was held on Monday, January 11th at 10:30 A.M. at Holy Trinity Catholic Church in Winsted. Father Tony Hesse was the Celebrant. Interment followed at Holy Trinity Cemetery.

Arrangements for Adeline Karels are by The Chilson Funeral Home in Winsted.