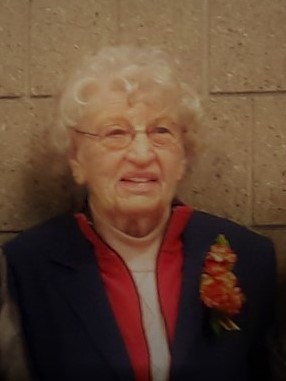 Adeline Eva Taylor was born on November 23, 1928 in Maple Plain, MN the daughter of Carl and Martha (Wagner) Taylor.

Adeline was Baptized in the Lutheran Faith on June 17, 1936 and Confirmed on April 30, 1944 at the Lyndale Ev. Lutheran Church.

Adeline Taylor was united in marriage to (the love of her life) Glennard Pawelk on June 19, 1947, at St. Mark’s Lutheran Church in New Germany, MN.  Adeline and Glennard farmed near Lake Ida for many years.  They sold the farm in 1997 and purchased a townhouse in Hutchinson, MN.  Glennard Pawelk preceded his wife in death on July 19, 2005.

Adeline worked at Tonka Toys in Mound, MN for over 20 years and retired from Washington Scientific in Long Lake.  She enjoyed flowers and gardening. She liked horseback riding, traveling, and dancing.  She loved spending time with family baking, cooking, and quilting.

Funeral service will be held at 3:00 PM on Sunday, July 24, 2022 at the Chilson Funeral Home in Winsted, MN.  The Reverend Kevin Oster will officiate.  Interment will follow at Winsted Public Cemetery.

Visitation will be held at Chilson Funeral Home on Sunday, July 24th beginning at 1:00 PM until the time of service.